Global Hydrocephalus Shunt market size is estimated to be valued over US$ 478 million in 2022 and is expected to register 7.4% CAGR during the forecast period. Hydrocephalus is a medical condition caused due to accumulation of fluid in the brain These shunts are medical devices that are placed inside the brain to drain out the extra cerebrospinal fluid (CSF).  These devices are highly effective and is widely preferred means of treating the patients. Over the last ten years, prevalence rate of congenital hydrocephalus has decreased to a large extent. As per the estimates, every one in 1000 births is affected with congenital hydrocephalus. Acquired hydrocephalus has also increased in recent years mainly due to changing lifestyle or illness and injuries caused to the brain. Medical industry has seen few major technological advancements that are highly effective to treat such cases. Shunting is one such procedure. Sales of ventriculoperitoneal Shunt has increased and is expected to continue its growth momentum during the forecast period. 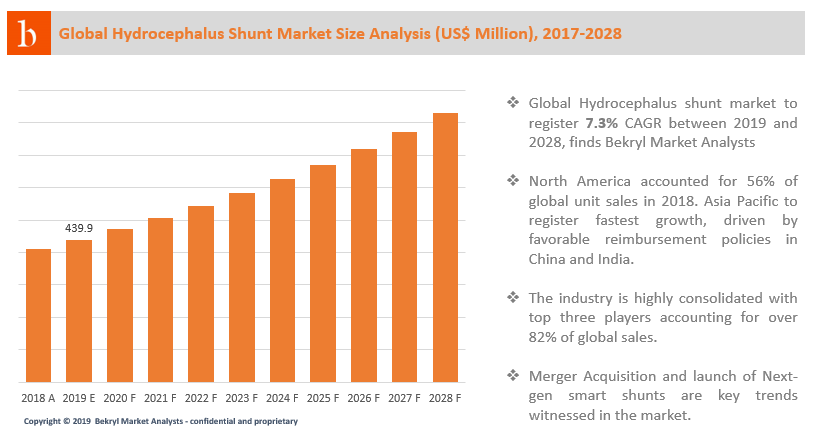 Hydrocephalus shunt market is highly consolidated. Only a few players are engaged in manufacturing the shunts. As a result, manufacturers have greater control on the profit margins. These players primarily focus on product development and well developed distribution channels. Partnership with regional vendors and hospitals has yielded stable growth since past many years.

In 2022, Medtronic plc, B. Braun Melsungen AG, and Integra LifeSciences Corporation accounted for over 81% of global sales revenue.

North America hydrocephalus shunt market accounted for 55.2% of global share in 2022. Growth in the region is mainly attributed to higher hydrocephalus prevalence rate along with well-developed healthcare infrastructure and favorable government reimbursement policies. The region is also characterized by presence of major companies having strong distribution channel.

Western Europe is another major market for the industry players. Almost all players have CE approval for the shunt. The region has significantly higher number of pediatric population suffering from the disease. The targeted demographic structure is also expected to increase during the forecast period, which will further demand the shunt implant in affected population group. In 2018, UK accounted for highest sales of shunt, followed by France and NORDIC.

Some of the key industry players covered in the report are:

Purchasing of Hydrocephalus Shunt market research report will give clients access to 120 minutes telephonic access with a research analyst. The duration for access to analysts will be based on the report subscription editions.