Apple juice market size is estimated to be valued over US$ 13,932 million in 2019 and will register a CAGR of 2.3% to create high market opportunity for players. The average annual per capita consumption stands at 0.7 L in 2019. Majority of the consumption is concentrated to developed regions and South Asia. Rising health awareness is one of the key factor boosting the apple juice sales worldwide. Apple concentrate has numerous health benefits that makes it popular among consumers. It controls cholesterol, weight gain and lower the risk of diabetes.

The industry is characterized by the presence of large number of small scale players operating locally. Lower operational cost and higher shelf life has created favorable ecosystem for new entrants too. However, the market has become hyper-competitive since last decade. 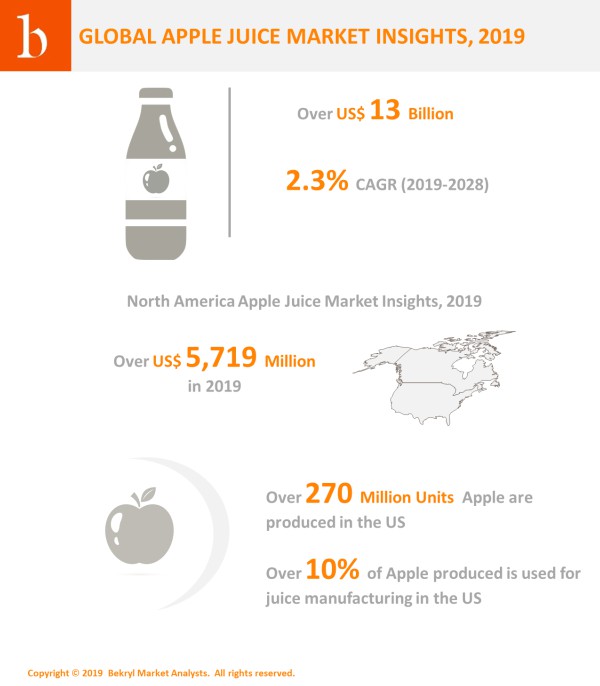 Globally, North America apple juice market was valued over US$ 5,719 million in 2018. The region is second largest producer of apples. It imports large number of apples from China and other countries to meet internal demand.

In Asia Pacific, China accounted for the highest share. The country is not only the leading consumer of apple juice in the region, but also one of the largest exporter worldwide. Over 610 thousand tonnes of apple juice is produced in China each year.

Who will benefit from the Report?

Purchasing of Apple Juice market research report will give clients access to 120 minutes telephonic access with a research analyst. The duration for access to analysts will be based on the report subscription editions.